[Beneath the uploaded image is my translation of a German article I feel well represents a contagion corroding the edges of that country’s mainstream with the arguments and criticisms long voiced by the German “Querdenker” protest movement, not to mention countless others internationally. The article does not go as far as it might, but the panicked majority are still far beyond reach when it comes to any suggestion of deliberate, planned wrongdoing by those who rule over us. My sense is of a cult-like Stockholm Syndrome that desperately, existentially needs to be right. There has been a profound emotional-psychological investment in the narrative that operates on a number of levels, not least of which is the meaning and importance the official c19 narrative affords those who so fervently believe it. At the same time, lawyers fighting this global tyrannical takeover, internationally, on multiple legal fronts, are making slow but steady headway against a rotten system hell bent on preventing, by all means available, every attempt to bring it to justice. The corruption is deep and broad, the system fearfully hateful of the sunlight these brave lawyers, and others, are shining upon it.

Of course, those of us fighting the wrongdoing are also emotionally invested in our cause. This makes effective communication between the two halves of a deliberately divided humanity extremely difficult, if not at times downright impossible. For my part, I want to see an open discussion of the facts and logic. If lockdowns work, if viruses are pathogenic, if the medical industry is not thoroughly corrupted, if science is not for sale, if ethical compassion and impartiality rule our global systems, I want to see that demonstrated. From the evidence I have seen, it is clear the opposite is true. The way this ‘pandemic’ has been handled, from the start, is as clear an attempt to stymie impartial discussion as one could possibly hope to see. Below the article, I link to an interview of a patent lawyer of the highest international standing, who brings to light clear evidence of a global conspiracy that is, in my opinion, beyond reasonable doubt. It should be watched by everyone.] 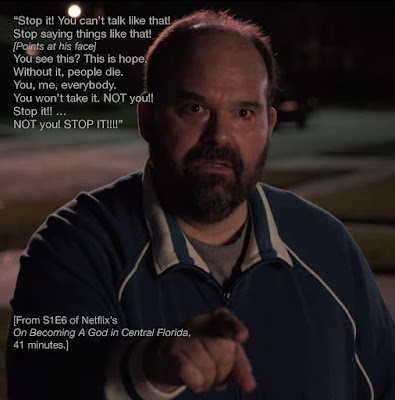 A character in the series finds out he's been fooled.

Human lives still count. Caution is not pointless. But more and more of us are losing faith in the logic of the dogmatists. No, the virus cannot be defeated. But we can live with it.

We – whether we realise it or not – were handicapped for one and a half years, physically and, increasingly, mentally. In trying to lock out the virus, the mental walls were built higher and higher. The attempt has locked out life. If you thought differently from the masterminds and their adherents, you were out of your mind or an inhuman being. But unless I am wholly mistaken, the “case-incidence Stalinists” are losing their domination of the skies.
I
Human lives count. Nothing else does. Caution is the only wisdom. Fear is not only allowed, it is required: This is the composition of the C-politics paradigm. Paradigms undergird decisions that may never be questioned. That is why they quickly become dogma, articles of faith. Those who call for paradigm shifts usually only want to replace one dogma with another. What is happening now is not a paradigm shift. Human lives still count. Caution is not pointless. But more and more people are losing faith in the logic of the dogmatists. No, the virus cannot be defeated. But we can live with it.
II
They claimed from the start that they only followed “the science”. There was no bigger lie. Worse, this paradigm harmed both politics and science. Virologists and mathematicians basked in their importance. That is why they allowed themselves to be corrupted by the politics that gave them so much power. They insisted on being right and thus kissed their futures as serious researchers goodbye. Scientists falsify their own claims. They invite divergent opinions. Politics popped its clogs and buried itself behind supposedly objective science.
III
For a year and a half, there was practically nothing but talk about how to avoid infection, at any price. Not about how best to treat the disease. In this way, medicine also cost lives. Today we know that too many sick people were put into intensive care units too quickly, that a large percentage of severe cases died from the side effects of tortuous intubation, not from the virus. Asthma sprays would often have been more effective. Instead, the weak, the elderly and those with serious co-morbidities were subjected to inhuman treatment. Medicine was also infected by the panic. Medicine and politics should and could have learned faster how to live with the virus. They were fixated on the burden on the health system, not the burden on society. Scientists who played it straight early on were not taken seriously, countries that deviated were berated. What remains is the certainty that the world has failed in the face of a foreseeable danger.
IV
Now the signs of the times are unmistakable. Britain's Prime Minister Johnson wants to end all the measures he himself imposed – despite rising incidence figures. He will set an example. Germany's future chancellor Laschet is moving away from his predecessor's policy, easing up in NRW just as Manu Dreyer did in Rhineland-Palatinate. Söder refuses to read the writing on the wall and will be handed the bill in Bavaria. Obsessive-compulsives and corona populists no longer dominate the debate. We would be well advised not to let the next wave drive us crazy. Although it will come. Because the deprivation of liberty has not helped. Because the chaotic measures cannot be justified. Because the failure of politics is clear. Because fear-culture is not culture; it destroys culture. Because patience has run out. Because “stay home” must not become the norm. Because life is intimate, not remote. Because showing your face is normal, covering it is not.
V
Am I overly optimistic? Surveys show how deep-seated the fear, which most media outlets have driven into the minds of citizens, has become. Surveys tell us most still dare not return to society, still disinfect hand and heart. Corona-spook Lauterbach still haunts talk shows and rants publicly about how he would like to be health minister. His intent rings like a threat. The ruling obsessives and their media troops still command attention. In this respect, too, the country is more divided than ever. What drags on and on is the true disaster.
Dr David Martin in conversation (82 minutes) with lawyers Dr Reiner Füllmich, Viviane Fischer, Antonia Fischer, Professor Martin Schwaab, and lung specialist Dr Wolfgang Wodarg
Posted by Toby at 7/13/2021 02:02:00 AM No comments: