Opting Out Softly With Your Song

Yesterday, after a tip from Charles Eisenstein, I watched the documentary "Ancient Futures" by Helena Norberg-Hodge on Google Video. It is fascinating because it shows in highly speeded up form how easily non-monetary, egalitarian societies can be corrupted. A brief example is how Helena Norberg-Hodge, charmed by the large and elegant self-made houses of Ladakh, asks someone which is the poorest house. The man takes some time to think about it and answers that there are no poor people in Ladakh. Eight years later, after the arrival of tourists, a large amount of Western glitter and bling, the young of Ladakh being forced into state education etc., she sees him complaining to visitors about how poor Ladakhis are. (Also of note is that there was no crime there. This seems a common theme amongst people who share and cooperate. It was true of the peoples of Tuamotu, and of St Kilda, until money came along.)

Monetary societies (aka Western Culture for this blogger) have powerful charisma, and I don't believe this is mere glamour. While glamour is something we do well, there is substance underneath it. Were there not, the West could not have been so 'successful.' (This is not a blog on what 'success' is.) As with all systems, even the monetary has a lifespan, has flaws, downsides, and I have written much on that already. It is my strong belief that we are transitioning to a post-scarcity, or gift economics, a new egalitarianism, as money's usefulness runs out. For those who want to help this difficult and disruptive transition along, to midwife its birth, the question is always: "What can I do?" My answer: Enter the spirit of the gift, opt out softly.

My wife was reading a Berlin magazine yesterday (Prinz) and came across a long article on street art here (in Berlin) and elsewhere. Her recounting of it excited me deeply. This is obviously no new thing, but the principle is, with the help of the internet, very powerful and quite quickly communicated. Give society of your gifts for free. It is non-rational (yeah, right!), brings a smile to strangers, defies society's expectations of us while breaking no law (yet), and sends a clear message which is also subtle and multi-layered. I'm pondering how to squeeze my talents into this format, and I think we all should. It needn't be pictorial art alone. 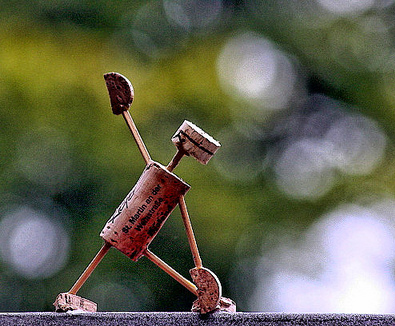 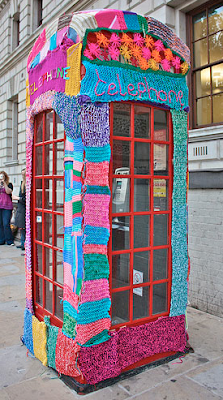 A note on the corkman: the artist who makes them is unknown. They appear randomly around Berlin on things like signposts, in various poses. They are glued in place so if some twit tries to steal one (some have tried) the art breaks. The artist has appealed with people to leave them there for everyone to enjoy.

In terms of human history this is a new (even though I'm late to this party) variant of gift-giving which flatly and humorously contradicts Adam Smith's rational economic man, and which cannot really make sense outside of large, anonymous cities. Things like this, and like free software, are an important part of the transition out of money into something new. As many of us as possible should join in!
Posted by Toby at 8/09/2010 11:10:00 PM

Nice ideas, Toby.
Actually, I think that gratuity is a VERY IMPORTANT part of our economy, and that it is STILL THERE, as I keep harping about, but that we are still singing this social Darwinist song and dance routine about "it's a dog eat dog world", etc etc, and ALL of our RECENT social analysis is STILL incredibly biased by social Darwinist theories of man that proceed from despair and disillusionment.
I said a while back that no seemingly new idea arrives in a vacuum, and we are just BARELY getting out of social Darwinism these days.
When I say "we", I'm talking about the social body.
The evolution of ideas is not homogenous either, and certainly not rapid.
By the way, I looked for the Eisenstein book in the U.K., where I didn't manage to find it.
But it sure was great having all those MATERIAL English books in my hands. I miss that from time to time here.
I like the cork guy.
You know, Toby, I think the WAY you are talking about this gratuity issue reminds me of Jesus, and his attitudes when people of the establishment tried to pin him down to rules and regulations.
Or Frank Herbert in "Dune", when he talks about decadence as being the incapacity of a people to be SURPRISED by anything.
The takeover of control, everywhere.
So... everything that we can do to undermine control freaking, and introduce an element of SMILING SURPRISE in our lives WORKS towards what we are looking for.
I believe...

My self help forum is a place where I put my gifts at the disposition of people who MIGHT not be able to pay for them, and DO NOT WANT TO.
Since isolation has become SO problematic, you should realize that there are greater numbers of people dropping out than you might think.
They are... staying at home. Living subsistance lives. Sometimes on allocations...because they can't find work, or exist in a work environment that in some cases has become vicious, and ruthless. (In other cases, it is simply their IMAGINATION of what the work environment is, and they disqualify their own capacities, and talents.)
Some of them are accused of being loafers, free loaders, whatever.
i am a freeloader, if you like.
When I was training as a shrink, I was impressed by the fact that... well, you know, I am a mother, and I brought children into this world, and tried to do my best for them, and loved them to the best of my capacities, and sometimes it just takes... an instant to DESTROY what years of love and nurturing have brought about.
If not destroy, at least seriously undermine it.
I think that deep down EVERY human being would like to be in a position to CONTRIBUTE something to the collective human experience.
But... NOT every human being feels the confidence that he or she CAN contribute, and if the social body does not ENCOURAGE ITS INDIVIDUAL MEMBERS to contribute in order to ENRICH IT, well, a lot of antisocial behavior can result, and the social body itself ends up breaking down.
And of course, behind ALL of this there are the tacit theories and assumptions about what makes human beings tick. What we are capable of doing. For better and worse.
I am still working on the breakdown of the Roman Empire...
You know... sometimes it is really essential to be able to give... a word, a smile, a touch.
To write a letter.
To sit down and play the piano for somebody.
More than anything, INDIVIDUAL people need to feel that THEY COUNT. (instead of being counted, or at least alongside of being counted).
Ephemeral gifts count.

Yes, contribution to the social good in some manner that elicits a smiling surprise (I like that), that in some little way highlights how interconnected we all are, that turns even anonymity into a shared experience that goes some small distance to bonding strangers for a moment. But above all, smiling surprise. There's hardly any space left as the monster-state controls everything it possibly can.

"But... NOT every human being feels the confidence that he or she CAN contribute, and if the social body does not ENCOURAGE ITS INDIVIDUAL MEMBERS to contribute in order to ENRICH IT, well, a lot of antisocial behavior can result, and the social body itself ends up breaking down."

Yes indeed, and the obsessive control isn't helping much either. There's so much childish fear out there to be overcome somehow, which takes a leap of faith, and unexpected gift-giving seems a great way to go about it. Breakdown always happens. It's how we navigate through it that counts.