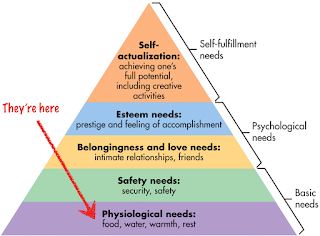 In my last post, I briefly defined health as a complex and living whole: “the dynamically interoperating totality of your physical, emotional, psychological, spiritual, relationship (with Other, including the environment), career and financial health over time”. No doubt many would draw a connection between this definition and Maslow’s hierarchy of needs. The latter is the subject of this post.

I used to like Maslow’s pyramid, but now find it restrictive in its clear-cut departments, as well as off target due to its focus on needs. I know of people who operate from a place of love, and from that a calm confidence the universe will provide. They operate from the upper section first but as a manifestation of love, trusting/knowing that the other sections will take care of themselves. For them, the pyramid’s dynamic is reversed, and in fact not really a pyramid at all. In my view, this is the necessary state of being of a mature consciousness, a mature soul.

The system we occupy and co-create is obsessed with Maslow’s lowest section. We experience the other sections as variations of it, understand and experience them through its lens; esteem is the consequence of conspicuous consumption and possession of as many status symbols as possible, relationships are first possible after we have demonstrated our worthiness through our success as property accumulators, the more we own the safer we are, and so on.

Obviously, my assertions here are a caricature of a very complex situation that has all manner of cross currents and counter influences.  But at root Maslow’s is a pyramid of needs. Love, for example, has little to do with Self’s needs, but rather with what is best for Other. The pyramid is thus a fear-based interpretation of reality: what do I, fundamentally separate from but surrounded by a threatening environment, need to survive, then thrive? Operating from a state of fear, we are acquisitive, cynical and suspicious. We can’t help but perceive reality as a finite pool of necessarily scarce resources for which we fight against all enemy Others to meet our needs. Life is a hard struggle. Only a fortunate few can climb to the top spot and enjoy the view from those superior heights. On the whole, this generates and justifies elitism and its Hobbesian sensibility regarding the rule of law and the need for a forceful state.

More prosaically and as demonstrated by The Story of Stuff, the constant output from the worlds of advertising and public-relations is a siren song crafted to fix our gaze on the bottom of the pyramid, to forever remind us, both subtly and grotesquely, that below it lies a hellish and precarious existence.  All this inrushing energy wildly inflates the importance of our base needs so that they pervade and colour everything else we see. This is the atmosphere we live in, the all-encompassing water we have a hard time perceiving as a deliberate construction.

As we begin to mature by patiently tackling our own fears, Maslow’s pyramid slowly stops making sense. We no longer live in insoluble scarcity but are instead surrounded by abundant opportunities to grow qualitatively. The rich diversity of people that surround us represent real wealth simply by virtue of that diversity. Our motivation becomes the rich rewards of participation and contribution, the meaningfulness of tending the totality of the garden that is our whole environment. Self is catered for via its love for Other. Esteem is not an end-goal or even a requirement, it is an irrelevance. Self-actualisation is a necessary consequence of a mature consciousness.

But this does not mean we no longer have physical needs. It means we tend to them in the same spirit of love that we tend to everything else. There is always work to be done, there’s just no need to do it fearfully, with a worried eye swivelled to status and esteem.

Can we develop an economics that emerges from a love-based, fluid approach to reality? That will become apparent as more and more of us choose health and maturity of consciousness as our guiding lights.
Posted by Toby at 5/02/2018 06:22:00 AM