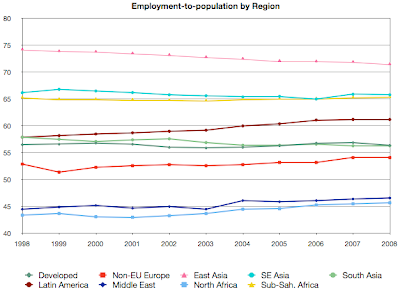 Here is a chart I derived from ILO figures. While my earlier post shows global employment to population ratio slowly declining, the detail view (by region) of this is quite a messy picture. I am unable to read very much into this at all, except that it does not really show increasing production efficiencies percolating through to increasing employment. Nor does it clearly show the opposite.

The star performer appears to be Latin America. I suspect this is not a result of outsourcing, but rather the result of the sort of trajectory witnessed when a region escapes some economic quagmire (the only way is up). Otherwise the surprise poor performance is East Asia, which would be predominantly China and Japan. As China is often thought of as a growth success story, and a recipient of much outsourcing, this is an odd result. Overall, the main story I get from the chart is one of flat performance with some clear rises and falls standing out from an otherwise dull crowd.

On the whole inconclusive I feel, not supportive of either one theory or the other(technological unemployment versus increasing efficiencies leading to rising employment). Rhetorically I could argue that because globally jobs are required to keep the economy healthy, which is a strong pressure to create jobs in whatever way possible, and because production efficiencies have been improving over the last decade thanks to the Internet and advances in robotics etc., the relatively flat performance of the world's regions would tend to suggest that classical theory (increasing production efficiencies lead to increasing employment) is not born out by the data.

I want to end this post with a US chart showing growth in public compared with private sector employment. I wonder to what degree this is a global phenomenon. Is the public sector taking up as much slack as it can? 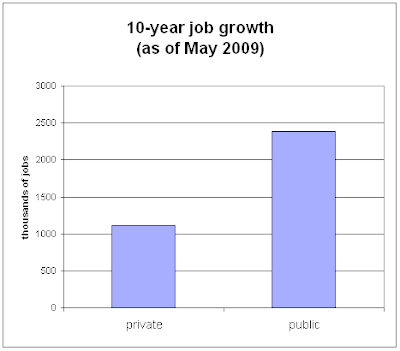