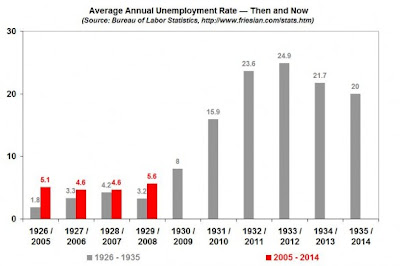 I find this chart very interesting, because it shows how low unemployment was in the early 1900s. I suspect most people don't know this. It also hints at, therefore, a possible trending of unemployment upwards, which somewhat disagrees with the classical economic thesis that increasing production efficiencies lead to lower unemployment; if there's one thing we can all agree on about the last century or so, it is that technological developments have increased production efficiencies.

Here is a chart I put together from ILO data which suggests that even the proportion of the global workforce in work can fall during periods of global GDP growth: 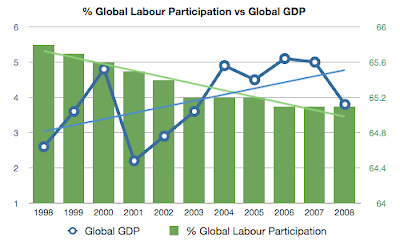 And as I have posted elsewhere, the natural level of unemployment, which is a measure of the supposed healthy amount of unemployment in an economy, has been climbing over the last 100 years too. Economists seem to think that the current level of healthy unemployment is about 7 to 7.5%. The pre-war level (if I'm not mistaken) was around 3-3.5%. That unemployment was under 2% in the early 1900s tells its own story. So even though I accept, to a limited degree (see post below) that technological developments lead to new work and new jobs, the idea that it leads to more work being done by humans is not born out by the actual facts.